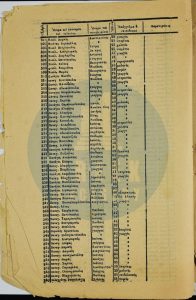 This collection consists of over 350,000 indexed records from all over Greece, covering a period of nine decades, from the 1840s to the 1930s.

In 1844, the Greek Constitution was passed and elections were held to create the first parliament. Lists were kept of names and ages of all men over the age of 25, who were eligible to vote. After 1864, the eligible voters’ age was reduced to the 21 years. Early voter lists (1840s-1850s) typically include: voter’s name, father’s name, age, occupation, property and nativity status. Later lists include: voter’s name, age, occupation, residence and father’s name. Want to know more? Check our relevant webinar!

This collection, consisting of 540,000 records, includes the names of all the refugees who emigrated from Turkey to Greece after the 1923 Population Exchange Treaty and received compensation for the property that was left behind. Apart from the refugee’s given name, surname and place of origin, in most cases the records include the refugee’s father’s or spouse’s name. 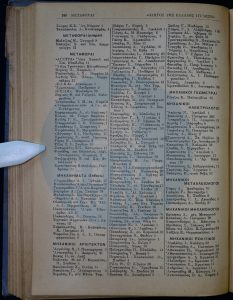 Business Directories are broadly used in genealogy research internationally. Nonetheless, until today, their use in Greek genealogy has been minimal, perhaps even nonexistent. The reason has mainly been the lack of a systematic collection of such records, together with a consequent lack of digitization efforts. Greek Ancestry’s team has worked methodically to overcome these barriers. Dozens of Greek business directories have been collected, digitized and indexed for the first time ever! The collection, currently consisting of over 200,000 city directory records, covers all of Greece (with the exception of the Dodecanese islands) from 1901 to 1947. Beyond an individual’s given and last name, the directories include his/her occupation and address. Sometimes, a father’s initial is mentioned, as well!

This collection consists of male registers of two areas of Greece: Chania, Crete, and Chalkida, Euboea, covering the periods 1817-1910 and 1839-1918, respectively.

When Greece became an independent state, municipalities started keeping Male Registers (Μητρώα Αρρένων), which list all the males born in a particular area. These records were kept for military purposes. Male registers were created for all areas in Greece, and as new areas became part of the country, they also began keeping such registers. In some cases, male registers were reconstructed retrospectively, based on other records. In general, male registers list: the name of the male individual, his father’s name, birth year and place of birth. Later registers may include the individual’s mother’s name and full date of birth. Want to know more? Check out our relevant webinar!

Military Lists identify individuals who were eligible for service in the armed forces of Greece. In the nineteenth century, all men were required to serve when 21 years of age. Military lists include the following information: the individual’s name, father’s name, municipality of origin, as well as the location and type of service.

The first census to be conducted in the modern Greek state was that of 1828-1829, under Governor Kapodistrias. The type of information included in the census reports varried, depending on the region. The census may include from the individual’s name, surname and occupation to his age, information about his family, number of children, wife’s name etc. Women were included in the censuses as wives, daughters or widows. This collection relies on material from the Central Office of the General State Archives. Want to know more? Check out our relevant webinar!

The 1856 Farmer Census consists of registers of farmers from many areas of Greece. In most cases, the registers include the farmer’s given name, surname, age and number of family members, while a father’s initial is often listed.

Parish censuses were registers of all the families of a parish composed by the local priest. They were important for church organization reasons. A parish census includes the name of the head of the family (which, in some cases, were widows), the spouse’s name, as well as the number of their children, male and female. This collection pertains to the area of Lakonia.

Source: Archives of the Metropolis of Monemvasia and Sparta

Until 1967, every church parish in Greece would elect and compensate its own priest(s). Every election required the composition of a register of all parishioners who were eligible to vote for the new priest; therefore, a voter list was created, mentioning, in most cases, the voters’ names, their age and and father’s name. The voters were the heads of households, primarily men, but also widowed or unmarried orphan women. This collection pertains to the area of Lakonia. Read more on parish voter lists here and here!

Source: Archives of the Metropolis of Monemvasia and Sparta