In 1953, my parents purchased a luncheonette on the corner of 75th and South Park Avenue (later named Martin Luther King Drive) in Chicago for about $7000. Actually, for the residents in the neighborhood it was a more than just a place to eat: It was a space to congregate, wait for a bus, pick up non-prescription medications, purchase a newspaper or magazine, and buy boxed candy. It also functioned in summertime as the only local ice cream emporium. The Park Manor Sweet Shop came with an employee, who after several transition weeks was replaced by my parents and us children—(George, David, and Peggy). We worked behind the counter, along with Uncle Gus Metos, my mom’s cousin, who had provided the loan for the purchase of the store.

For immigrants like my parents, Peter and Sophia, owning a retail business was the road to an independent income and some control over their family’s destiny.  For émigrés without an education, like my parents, self-employment was the vehicle for their children’s education and their ascent into American society—hopefully, in the professions. For their children this meant no-nonsense diligence in their studies besides assisting in the store after school. After-school sports or other activities were out of the question; we were called to the store and homework once the school day ended.  In a sense my family was in a space pod in an alien environment. We were the only family in the Park Manor neighborhood with Greek roots,  a different religion, a distinct cuisine, and who spoke two languages.

The store was open from early morning for breakfast to late evening, when lychnobites would come in to fill their coffee thermoses and grab a bite to eat before their night shifts began.  Lunchtime was always busy as nearby factory workers clambered in for a-home cooked meal costing a little over a dollar.  The menu changed every day; one day it was corned beef and cabbage, the next pot roast with roasted potatoes, on another baked ham and mashed potatoes, and on Fridays fried fish and rice. All meals were cooked and served by my parents with loving care. Our family moved to a two-bedroom apartment over the store, which reduced commute time and allowed us to “be right down” when we were needed.

It was grueling, on-your-feet-all-day work, with little time for respite; it was open 16 hours a day, seven days a week.  For us children, in addition to the time spent working in the store during the school year, we devoted longer hours to helping out in the summertime. But the operation of the store depended on our parents. During the lunch rush, Uncle Gus would take cash from patrons and sell tobacco and magazines. Within a year, the business was on its feet, loans were repaid, and improvements made that expanded the business.

The neighborhood was an interesting blend of ethnicities: mainly Irish, but with a dash of Swedish, and Italian.  St. Ambrose, the local Roman Catholic Church, served the ethnic Irish and Italian families and their daughters, who along with my sister attended Our Lady of Mercy School. The virtue of young girls was paramount in the minds of parents in the neighborhood, but when the misfortune occurred, they were nonetheless supportive.

Mary Doyle got pregnant in the back seat of Tom Haight’s 1948 Hudson, a sedan with spacious interior seating.  Tom was on leave from the military at the time and looking forward to the prospect of service in Korea.  Once the pregnancy became apparent, marriage was discussed by the parents; but given the immaturity of the couple, the prospect of an enduring union was unlikely. Abortion was out of the question.  Both parents decided that a settlement was necessary to ensure the support of the infant that Mary would raise on her own. Tom’s father, Patrick, wrote a check for $1000, a considerable sum in those days. Mary, no longer in school, would appear around the neighborhood wheeling a baby carriage and surrounded by a coterie of her former teenage classmates ogling the infant; the girls however, had no plans to follow suit outside of marriage. Mary continued to live with her parents and was loved by the Park-Manor community without scorn or the stain of an unwed birth.

A dozen or so young men of the community hung out in front of or in the environs of the store, which annoyed my father no end.  Periodically, he would storm out, broom in hand, to sweep the pavement of what he considered debris, and the youth would come into the store, filling all the counter stools and ordering a small Coke for five cents. This back-and-forth, out-and-in routine would prevail through the warm days of spring and summer, but when winter arrived the pavement was clear.  As time passed, we got to know the boys individually, and since the sweet shop was their territory, they were protective of the store.

One young man had a special place in the hearts of all, Demetrios (aka Jimmy) Petas first entered the store on crutches, accompanied by a few other young men who took pains to see that he was cared for, whether he needed a ride to school or an errand to be run.  Jimmy was hospitalized at age 16 for several months for the treatment of bone cancer. His leg was surgically removed below the knee, and he wore a prosthetic device during a period of remission.  I would visit him at his Irish grandmother’s home; his parents at the time were not on the scene. The cancer pain made life difficult and a steely bitterness pervaded Jimmy’s demeanor. We talked about the things on the minds of young men: girls, sports, and where we were going in life.  Some of our deliberations had a philosophical tone, centering on what it all means. Jimmy was not optimistic about his future.  Reality hit when the cancer spread to his thigh. He had another operation to remove the cancer and was sent home, but the cancer had metastasized throughout his body. When I visited, I found him on a divan in the sunroom quietly contemplating his situation. His other friends also visited, keeping him company until the cancer finally took him away. Many of neighborhood youth attended the wake at his grandmother’s home, with the corpse laid out in the dining room. All were in tears. We crammed into Jimmy’s room, away from the adult mourners outside. Soon a bottle of whiskey was opened and passed around the boys and girls. Tears were replaced with mournful remembrances of Jimmy and times together, and our gathering turned into a full-fledged Irish wake to see Jimmy off.

Meanwhile business at the Park Manor Sweet Shop was thriving. Lunch was a large revenue source for the store. The lunch crowd consisted mostly of the workers at Ryerson Engineering, an electronics firm whose main business was providing specialized antennae to the U.S. military.  Across from Ryerson was the mom-and-pop Swenson Casket Company, a warehouse selling funeral supplies to local funeral homes.

Around noon, workers from the nearby factory would arrive, filling the booths and counter seats,  as well as filling the air with their lively chatter. They pretty much ordered what was on the daily luncheon menu, but some would order burgers, fries, and a Coke at about half the price of the lunch meal. Mom and Dad would fill the orders (with the help of the children in the summer) while Uncle Gus took the cash.  At the end of the lunch, my dad would take himself to a quiet corner and eat a sandwich in back of the store.

Located as it was in a middle-class residential Chicago neighborhood, the Park Manor Sweet Shop, nonetheless attracted some sophisticated and urbane customers such as William Scace, president and CEO of a division of Thor Tools.

We three children went to college in Chicago, one after the other, realizing our parents’ dream, while we continued to put in time at the store.  The neighborhood changed from all white to all black except for our family, which continued to live over the store for several years, after which we finally moved to the nearby South Shore District.

There were many other rich vignettes that crossed the threshold of the Park Manor Sweet Shop, but these recollections of a time and place are etched in memory.

Did you like this “Yiayia & Me” article? Help us with the next one!

Contact us to share your story… or consider making a donation by clicking here, and make your yiayia proud!

By Sofia Pitsineli and Gregory Kontos Discovering an archival treasureThe archives of the Greek Ministry of Foreign Affairs are preserved by the Diplomatic... 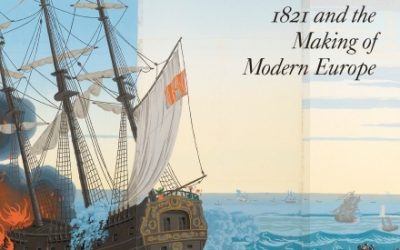 A Review of “The Greek Revolution: 1821 and the Making of Modern Europe” by Mark Mazower

By George Zimmar Greece, a land with a special destiny, Freedom’s home or Glory’s grave...