So here we were, Greeks on the South Side of Chicago, among the Blacks at a time when African American consciousness was emerging to political action. Our connection to Greekness was through the St. Constantine and Helen Greek Orthodox Church at 74rth Stony Island Avenue. Thanks to my mother’s deep faith, incense burned for morning or evening prayers before the household icons, and church was every Sunday. Regular attendance at worship services entrained me both to the Orthodox faith and Greek ethnicity. Hellenic School met weekday afternoons and eventually became K–8 grade school. The school was staffed by high-level educators—for instance, Andrew Kopan (1924–2006), later professor and chair of education at DePaul University in Chicago.

Three days a week, my brother and I boarded a street car that would take us from 47th and Drexel Boulevard to 74th and Stony Island, a ride of about 30 minutes through several neighborhoods—Hyde Park, University of Chicago, South Shore, and finally to the Koraes school. [Adamantios Koraes (1748–1833) was a Greek humanist scholar whose advocacy of revived classicism laid the foundations for the Greek struggle for independence.] We had a 20-minute pre-school recess period and reluctantly pressed into school from 4:00 to 6:00 pm three days a week. Since my mother spoke only Greek to me as an infant and toddler, my accent was not a cacophony to the ears of Greek teachers.

In large and small ways, both conscious and unconscious, we students were transformed and connected to the very idea of what it means to be Greek in a world where Greek is not spoken, where Greece is not a superpower, and where Hellenism is a topic in history no longer read. What profit can there be in such study of Greek? What makes such study profound? Simply stated, another language, another voice, another culture, another pair of eyes, another way of thinking, another soul. It becomes a matter of identity, who we are, and what of us we preserve.

The sexes were segregated in class, with good learning taking place on the girl’s side of the classroom and disruptions to teaching on the boy’s side. The instruction was mainly in language, reading and writing. We were asked to read out loud, learn poems, mostly about the Greek Revolution, and write short essays. Once a year on March 25th, my brother and I were hustled onto the street car dressed in borrowed Evzone costumes, fezzes, and slippers with pom poms—to the amusement of our fellow passengers. At church, we recited poems on the heroism of Greeks striving for independence, the treachery of Turks sustaining the yoke of slavery, and the Holy Spirit inspiring the quest for freedom. Each of us went to the stage and in a single breath recited a long poem on the cause of the Greeks to a beaming parental audience. Some of the friendships I made at Greek School fell by the wayside as we attended different high schools and began the process of drifting away from the embrace of the Holy Church in adolescence.

Do you like this “Yiayia & Me” article? Help us with the next one!

Contact us to share your story… or consider making a donation by clicking here, and make your yiayia proud!

We live in a culture in which for many, identity is based on race, social class, or ethnicity. However, a Hellene identity involves much more than ethnic origin. That my family is from Kalamata or my origins are from Epirus accounts for a relatively small part of our Greek identity. That we can dance the ballo or sing the kalanda (carols) are mere fragments of our identity. That we can prepare spanakopita and stifatho fills the stomach but nourishes a small part of what it means to be Greek. Our identity is not a matter of place, customs, or traditions but of an ideal.

Our precious Hellenic School taught us children about a noble lineage—namely, that our Greek DNA is connected to the great minds and unfettered souls of those who created philosophy—Plato, Aristotle, Socrates; established science, including mathematics and modern medicine—Pythagoras, Euclid, Archimedes, Hippocrates; who founded the arts, theater, and literature—Homer, Sophocles, Aeschylus, Euripides; who invented the alphabet on which all modern writing systems are based; whose architecture has influenced buildings from the Parthenon to the White House; who made the first maps, brought us the Olympic games, and established the very democratic ideals that characterize Western civilization. And who brought the teachings of Christ to the world through the Holy Scriptures.

Hellenism is a universal imbued in what psychologist Carl Jung called the collective unconscious of mankind. How fortunate we and our children are to be linked to such a heritage, to be able to boast of such an identity. Our Hellenic Schools teach our young what it means to be a Hellene and allows them to carry that proud identity into the world—in the process making it a better place in which to live. 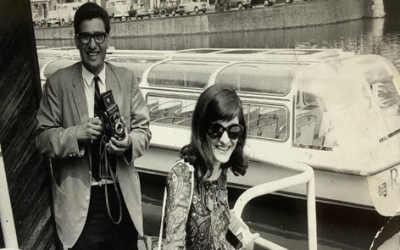 Travels with my sister: Greek Americans in Europe

By George P. Zimmar When they asked Socrates where he came from, he did not say ‘From Athens’, but ‘From the World’. Michel de Montaigne Early June mid-1960s:...