In my years at Hyde Park High School in Chicago, I was not a model student, as evidenced by my three expulsions: two for fist fights and one for smoking in the park across from the school. Hondo, the eagle-eyed cop, spied the canopy of cigarette smoke over a bush and turned me in. The fist fight with Bruce Pertle began as an incursion of my personal property. The fight started on the stairwell, continued down the stairs, and we broke into a homeroom between class periods. Bruce pushed me, I fell back, and his knee was on my chest with outstretched fist ready to pounce when a burly senior football player grabbed his arm, pulled us both up by the neck, and threw us out of the classroom. Unfortunately, word got out about the incident, and we were suspended for two days. Bruce and I remained friends, but he respected my space and property from then on. The other expulsion was over an incident in the lunch room where I threw a classmate on a table of food for calling me a smart-ass Greek. We Greeks have a way with food. My father and I were called to Assistant Principal Edward Small’s office, where he read the riot act to me. Surprisingly, dad took my suspensions without reproach but assigned some extra dirty jobs for me at the store. As a seventeen-year-old, dad also had his share of fights while working at his uncles’ candy store.

In 1908, as a newly landed immigrant, my dad worked at the Noble Street candy store that belonged to his uncles, brothers Gus (Constantine) and Joseph (Ioannis) Zumaras (variant spelling of the family name) on Chicago’s near West side. Behind the counter were baseball bats ready for troublemakers, often drunk, and typically belligerent, who would enter the store for a handout or to haze the staff. They created this discord simply because the owners were Greek immigrants and spoke English with an accent. Greek-owned luncheonettes, bars, ice cream parlors, and grocery stores often suffered such travail. Ironically, as is often the case with ethnic prejudice, the ruffians’ parents or grandparents were immigrants themselves. Perhaps resentment is the basis for such animosity toward newcomers who had established a business and prospered. However, when the trouble got out of hand, the bats would come out; the miscreants were threatened with force, at times with a scuffle and minor bruises, until peace was restored. Once in a while, trouble at the store turned deadly.

My dad’s 60-year-old Uncle Gus Zumaras also owned a cleaning shop on 855 North Ashland Avenue in Chicago. Leo Proch, along with two other intoxicated men, one evening tried to enter the shop after hours to steal the undeposited weekly cash. After shattering the plate glass front window, Leo tried to enter the premises. Gus threatened him with a gun, but Proch continued his efforts to get in. As Proch crawled through the broken glass, Gus fired, struck him in the head and killed him. Proch’s companions fled. According to the news account in the June 24, 1934 issue of the Chicago Tribune, the 32-year-old Proch was married, a father, and lived at 918 North Ashland Avenue, just a block away from the store. He was my uncle’s neighbor, yet had so little regard for the Greek immigrant shop owner that robbing him was an option. No doubt alcohol played a role in this incident, but tragically it was repeated many times as immigrant Greeks were forced to protect life and limb and sometimes unfortunately were themselves killed.

It was such intrusions into Greek businesses that had led to the establishment of the America Hellenic Educational Philanthropic Association (AHEPA) on July 26, 1922 in Atlanta, Georgia, to fight discrimination, bigotry, and hatred experienced by American citizens of Greek descent at the hands of nativists and the Ku Klux Klan. AHEPA promotes education of the Greek Heritage, and underwrites many philanthropic and charitable projects for the omogenia and American society. As such, AHEPA stands as a beacon of Hellenism in America.

By Giannis Michalakakos The tradition of Mani is rich of stories and poems referring to mythical and supernatural creatures. Many of them concern the goblins... 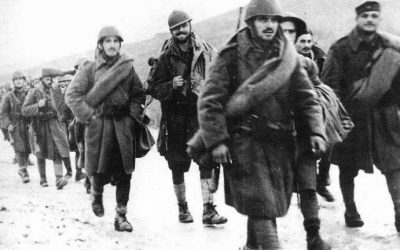